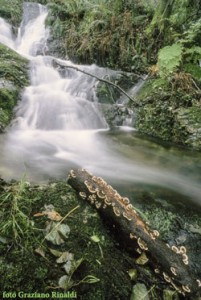 ummer the days are so hot that even on the most beautiful beaches of the island of Elba one needs to find a cooler place, but of course a naturally cool place, something that would contrast completely with the usual natural Mediterranean island environment and its associations with the typical seaside chaos.

Such a place does exist on Elba and is located in one of the valleys of the northern slope of Mount Capanne called Valley Nivera. The name reminds us of the conservation of the snow during the summer, before the invention of refrigerators, an operation possible only in very few places on the island.

One of the rare perennial streams has run through this valley for many centuries and runs even today. The landscape of tall trees is made up of strong chestnuts  that were planted by the residents of the small hillside village of Poggio. For several decades no one thought about the chestnut trees and now they have been affected by diseases and pests and like a dog abandoned by their owner, they are sadly and quietly disappearing. Their place is being taken over by the original inhabitants of this area, the Holm oak (Quercus ilex) the evergreen oaks that once dominated the landscape of all the islands of the Tuscan Archipelago.

The small amount of land collected between the large granite boulders of the mountain is sometimes not sufficient to support this gigantic vegetation and occasionally by the streams you will see the the large tree trunks lying completely uprooted like warriors on the battlefield. The amount of mouldering vegetation consisting of dead trunks and branches of trees and shrubs is really impressive, and in the past would have been used in the home, but today with the annual autumn storms these branches are transported along the bed of the stream, where they accumulate under every waterfall.

The forest has started to construct and select a new balance and it has already seen off even the larger shrubs such as strawberry trees, which no longer have any chance to compete for light with large forest trees. During the winter season on the trunks of trees there is a riot of green moss, while the mushrooms are busy disintegrating this huge amount of organic matter.

Precisely because of this timber lying on the ground, the first impression on entering the forest in the valley of Nivera is of an eco 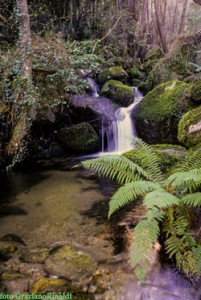 system seriously compromised. In fact this is correct in many ways, but partially, since the residual forest of chestnut that is still surviving is a secular culture which will leave the field to the original vegetation if it doesn’t recover. In my opinion, where the greatest destructive environment impact lies is in the undergrowth, where wild boar and wild deer forage and where you can resign yourself to losing all hope of finding even one plant bulbs. These animals are not native, have been introduced for the enjoyment of hunters and they have a devastating impact on the environment, devouring every kind of undergrowth plant or edible micro fauna  You can see what I’m saying at first glance, when you  notice that every inch of ground has been dug over by hungry families of wild boar.. Until about twenty years ago it was not uncommon in these woods to come across beautiful blooms of orchids, daffodils and many other valuable species of bulbous plants of which in a few years we have lost all trace. Too pressing were the hunting interests and too weak the commitment of the institutions responsible for conservation.

Yet, even though it has been strongly depleted and impoverished by the senselessness  of man, the Valley Nivera still gives us a landscape that can surprise us for its scenic beauty and the extraordinary wealth of water, so rare on a small island in the Mediterranean, especially considering the fact that all this water flows from a very permeable rock such as granite, the only mother rock of the highest mountain of the Archipelago Toscano, an immobile and powerful witness to age-old human events, animals and plants of this stretch of our seas.