The oldest wall on Elba island

This is a walk between the sky and the sea which, at one time, was the site of the remains of the tiny Romanesque church of San Bartolomeo, in one of the most spectacular scenic routes on the island. Duration: 3/4 h, round trip, 6.7 km. Difference in altitude: 480 mt.

Starting from the small village of Pomonte, we begin at the only road inside the village where the route is well indicated by a map mounted on a wooden panel, this is where you will find the entrance to path n. 4. On the first section, the climb is quite steep, but it would be even more so if you started from Chiessi, so you should proceed in an anti clockwise direction.
The beautiful view right from the start makes the effort worth it and although it is rather uneven in some places, the trail is completely paved in granite. It was in fact an important road of communication in the past, because in the country the peasants (who worked in agriculture, along with rearing a few goats which was the only possible activity before tourism) walked daily to their small, plots of land situated on the mountain. Spring and Autumn are the best times to walk here, the scent of the bright yellow flowers of gorse and the colours of the cyst and the wild lavender, fill the air and the view .

If you occasionally look down towards the bottom of the majestic Pomonte valley, which opens up between two high slopes opposite the island of Pianosa, the climb will not seem so hard. The vegetation is lush in places, and has overtaken some fields planted with vines. After the frequent deliberately started fires (usually arson started by villains) of the 80s and 90s of last century, the natural vegetation has rapidly re grown in the rare fertile soil, just about held in place by ancient terraces interspersed here and there with flattened smooth granite on which the only form of life that thrive are the lichens, as if to point out that the real star of this territory has always been and will remain this hard igneous rock. The tiring daily life of the local people is etched into both in the dry stone walls that accompany the walker for the entire route, as well as in the rare agricultural ruins in ruins, and temporary shelters built with granite stones. The same material which was used as posts in the vineyards! 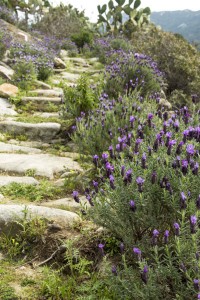 seems impossible that theses buildings have been able to survive in an area so rugged. Yet they were able to transform these valleys into quality, productive agricultural areas. and it bears witness to the commendable determination with which even today some continue the cultivation of some stamp sized areas of vineyard and vegetable garden, besieged as they are by wild boar and wild mountain goat, which were imported here in the second half of the last century. At the well sign posted junction, between path n. 4 and path n. 3, we take the latter, at last walking a few hundred meters on level ground. When the trail turns downhill you will already glimpse a town similar to Pomonte, that of Chiessi, where we will arrive shortly. Before you turn in the direction of Chiessi, take a good look to your left where you will see small piles of stones: this rough barrier indicates another deviation which is not open to you. It is a short side trail that leads to the summit of Mount St. Bartholomew, where, in less than 200 meters, you will encounter what remains of the church. But before you see the ancient artifact, you will find a natural granite boulder, turn left and you will be straddling the villages of Pomonte and Chiessi. You are now in front of the monumental natural granite cone which is the summit of Mount St. Bartholomew, which stands overlooking the two villages which at the same time protects the perimeter wall of the Romanesque church, miraculously still standing. It is all that remains of this tiny church, built a thousand years ago in an invisible point from the sea and dominating the two biggest valleys in the west of Elba. The small grassy meadows that surround it add to the charm and beauty.

Wandering around you can see the foundations of the other three walls, including apses, facing as always to the east. From here the Island of Pianosa appears to be a stone’s throw away and on some days you can see clearly as far as Corsica, Capraia and Montecristo. In their great simplicity, these walls speak to us to show times past, better than any living inhabitant in this part of the island. Pieve (from plebis) was built as a strategic lookout and protection against the Saracen pirates. But it was also not just symbolically, a defence for power of the Church, but because of its widespread power, it also collected the tithe.

A few meters away from the wall, at the foot of the summit of the mountain, there is a railway for the daring who want to try their hand at climbing. I don’t know about any documents that testify to the cause of the destruction of this little church, but I wouldn’t be surprised to find that after a short siege it was almost totally demolished by some pirate horde. To the south of the still standing wall, along with scattered stones, you can see the circular shape of a shelter for goats that perhaps it is no less than an ancient church.
The descent to Chiessi is steeper than the ascent from Pomonte so pay attention to your ankles. In this case you will be travelling companions with the dry stone walls of the terraces until the end, these are now covered with vegetation, and where now and again you can see the small animals of the Mediterranean, now dominant on the island of Elba. Once in Chiessi you’ll have to go back to Pomonte, You can do both along the main road and you will enjoy all the beauty of the coastal road on the cliff, or with the old trail just above the main road if you do not want to walk on the asphalt.