One late afternoon in May 3, 1814, the British warship Undaunted dropped anchor in the bay of Portoferraio. On board the ship was Napoleon who was defeated at Leipzig and sent into exile on our island.
For the two-hundredth anniversary, Elba is commemorating this extraordinary event. Beginning from May 3 2014 there will be an interesting series of celebrations that will pay tribute to this special moment in history and its protagonist, which certainly will capture the public interest and have a wide appeal for tourism. They will take place over the next ten months, until the evening of February 26. 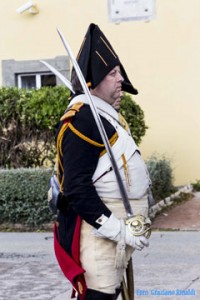 We will keep you informed of with the most significant initiatives, starting with commemoration of the landing, on May 4 … one day after arrival.
On May 3, Napoleon arrived in Portoferraio, met with local authorities on board ship , but only at 15.30 the next day did he come down from the ship.
Why this delay?
In a letter to Ugo Foscolo, the Countess of Albany, companion of Vittorio Alfieri and who didn’t exactly have benevolent feelings towards the deposed emperor, wrote: “He has shown, since his arrival on the island, to be more vain than proud. He stayed twelve hours on board the Undauted to allow time to organise his ceremonial entry and his reception. ”
Today we would say that Napoleon was endowed with the natural intuition of a great communicator, for that delay, among other things, promoted the success of a popular welcome that probably turned out better than anyone expected.
It must be said that in fact the island of Elba had already been in French territory since 1802, so not surprisingly, in Portoferraio you will find a plaque dedicated to the writer Victor Hugo, who spent three years of his childhood there with his father, Captain Joseph Leopold Hugo. But the events that had led to the annexation of Elba to post-revolutionary France did not all go smoothly; over time there had been episodes of extraordinary violence, such as the siege of Portoferraio from the French troops in May 1801, which lasted 13 months. Portoferraio was not conquered by force of arms! It was the order of Archduke Ferdinand III of Tuscany ,then in Austria, who, after the Peace treaty of Amiens ordered his general De Fisson, to surrender to the French
The commander of the Elban population, general Dalesme, never would have imagined having to accommodate the emperor as “Emperor” of Elba. But after reading the message delivered from a senior French officer who jumped to the ground with a spear, he had no further doubts:
“Mr. General Dalesme
As circumstances has brought me to give up the throne of France … I have reserved the sovereignty of the island of Elba … So I’m sending you the general Drouot with these pages to take delivery of the said island without delay, and the warehouses and the properties that belong to my imperial rule. Please introduce this new state of affairs to the people and relay to them the choice I have made of their island for my stay, given the mildness of their manners and goodness of their climate. They will be the constant object of my deepest interest …
Napoleon ”
The short 10-month stay of Napoleon on Elba, has left its mark and it can reasonably be said that on that afternoon two hundred years ago the modern history of the island of Elba truly began.
Graziano Rinaldi
Share
Tweet
0 Shares
Posted in Information | Tagged Elban emperor Napoleon