The Island of Silence

The aim of my most recent visit to the Island of Pianosa was to go to one of the smaller beaches, deliciously unknown in the Tuscan Archipelago. I had already admired it before during a bicycle tour organized by the guides of the National Park and seeing it immediately made you want to go back.
Late September is usually late summer too and the days are sunny and fresh, the light is clear and preparing for the warm colours of autumn, which is the perfect time to embark on this trip.

Hotel Milena
I booked in at the Hotel Milena and planned to stay the night there. Staying over on the island was problematic until 2010 , but since the Hotel “Milena” (info@hotelpianosa.it Tel. 392.8277945) opened its doors it allows you to enjoy the archetypal silent state with simple tranquillity.
On the stroke of 17.00, when the last ferry that connects the island of Elba to Pianosa leaves , silence pervades the island. From 17.00 to 11.00 in the morning, there are only the few dozen detainees living in semi-freedom who look after the single restaurant and bar alongide few others but all of them are very cordial and helpful in providing information about the island. This also goes for those members of the Association for the Defence of Pianosa, which was founded by former residents who until 1998, the date of closure of the prison, were operating on the island supporting the penal colony and who have restored their old home.

Contemplative Life
There are no distractions on Pianosa, or a social life.
After sunset the island is shrouded in loneliness, but very often a sudden unexpected show of nature attracts the attention of the guests. The scene takes place at the point which most strikes the imagination of those who visit Pianosa for the first time: its tiny harbor, enclosed by embattled bizarre buildings like those in fairy tales that end well. Although certainly there were much older buildings , those that we see now, in the usual state of decay, date back to the institution of the penitentiary in 1858. 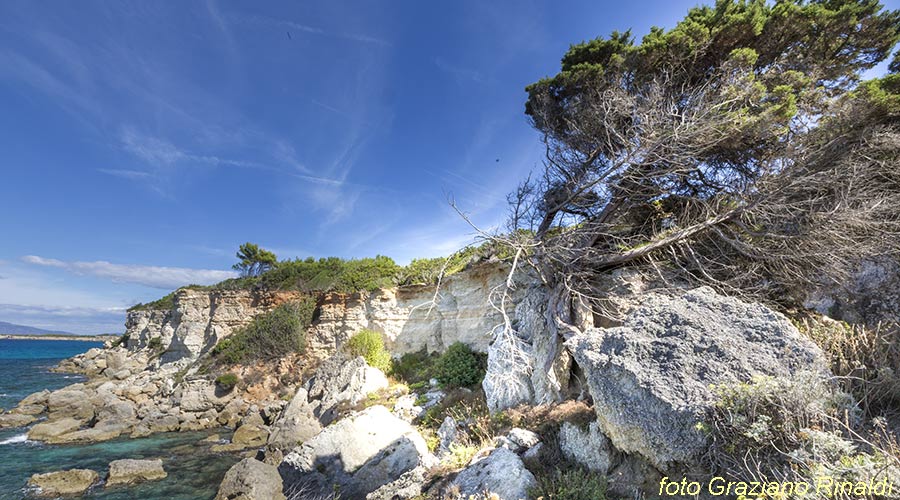 Entertainment One not to be missed
Immediately you are struck by the atmosphere of eerie abandonment of the Fortress and the Observatory buildings, one in the west and the other east, and it fills one with wonder. Then, in addition there are beautiful ocean creatures that are evolved predators moving in packs. If they decide to go inside the marina, then you’re sure to be rewarded with an unforgettable experience: they slowly and constantly swim in a circle from left to right, hundreds of barracuda occupy the entire water basin all night long!
These fish, some of which exceed one metre in length, hunting in packs, probably use this ritual every night to rearrange and define the hierarchies of the group. It’s strange, but logical, that the other fish, which normally live in the marina and that would otherwise be consumed in a few moments by the aerodynamic predators, merely arrange themselves at the edge of the dock not at all intimidated by the impressive parade of sharp teeth. 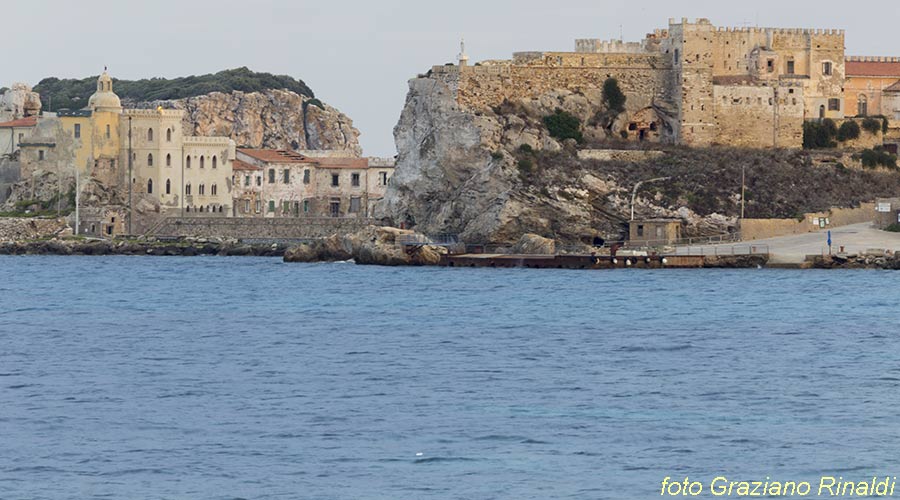 A sleep cure
Fish, as you know are naturally quiet, so if you decide to sleep, as I did on the island, neither this concourse of barracuda or any other noise will disturb your rest.
The absolute silence and a gentle night breeze usually don’t encourage early rising, so even I, in the good sleeping tradition didn’t get moving on the bike (quite the best option) before eight.
The wind that had been battling against the island the previous day from the northwest (mistral), had become Grecale, Northeasterly, and so the entire east coast was being beaten by bright waves (read “The golden rule for those who travel on small islands” ). I was going north, along the coast where, although the wind was strong, the sun was still powerful so that it was comfortable even in shirt sleeves.

Real walls and mental walls
Leaving the town or the “public ” area, to enter the former penal colony, we have to pass by the horrible wall built in the late seventies with a quantity of concrete that only a frightening emergency could justify. I walked the entire length, reflecting the correlation of walls-fear-effectiveness, and discovered that you could write a human story that goes on forever about these three concepts.
Finally out of the shadow of the physical and moral wall we come across the remains of the Roman villa of the Imperial age, now semi-submerged and overwhelmed by a strange modern cover that introduces us to another story that deserves another wonderfully tragic narrative.

Then there’s only nature.
Low jagged cliffs with vegetation that serves as a setting. Proceeding directly north on Pianosa is almost impossible to get lost, you meet a couple of small coves, the first has the rather banal name of Cala Posedonia (seaweed), for the fact that it accumulates large quantities of dry Posidonia leaves, giving the usual misconception that the marine plant base of the Mediterranean ecosystem is seaweed; the second iscalled after a poor man, with the surname Biringhelli who lost his hand following the premature explosion of a stick of dynamite used for fishing, and yes, they once actually used this system.
At this point, in the distance you can see a modern lookout tower, just above Punta del Grottone an offshoot north-east of the island, and which is a place of nesting shearwaters and in the past the rare Corsican gulls were visible. So for this reason visiting is not allowed. 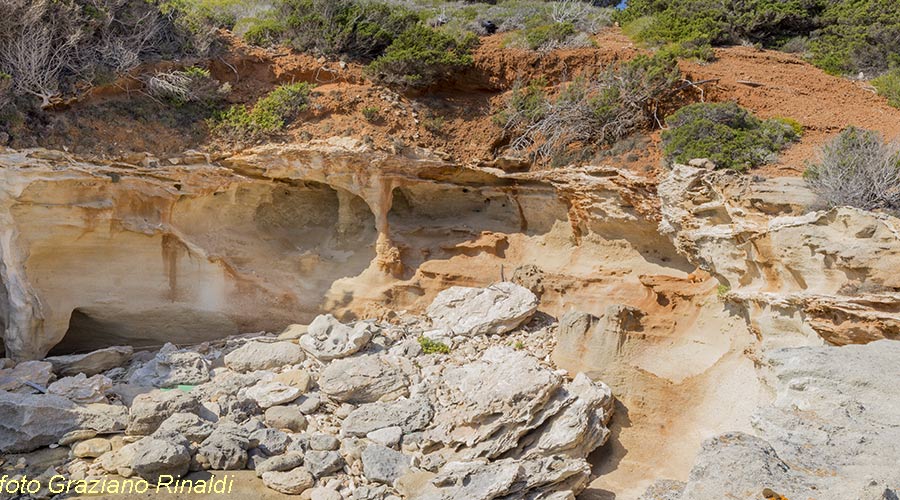 Aesthetics Prison
So avoiding Punta del Grottone, take the left along the path that leads you from near the tower to a big medieval-building, with towers and high walls, built with the same rock as the cliffs below, It is light and friable (but less than concrete ) which has a beautiful rosy glow in the morning and afternoon light. Of course this “manor” with gratings and steps was a prison building and is also in a state of disrepair and very unsafe,so much so that you can’t go in..
Under this building called “Marquis”, it is the beach I’m looking for.

I look at below, but marvel, the beach isn’t there!
Yet it was only a couple of weeks ago that I decided, when the right moment came, that someone should spread my ashes here from the pier that stretches a few metres over a white sandy beach, that is surrounded by a bay with its two natural bastions of clear pink rock. It stretches out in full length in front of Corsica in all its length, holding out it’s arms to the sea..

I could not resist.
I jumped down to the pier.. Below, in the shallow depths, there was a huge bream swimming , that as soon as it saw me instinctively jumped out to sea, but almost immediately came back, here the fish are not afraid of featherless bipeds.

I understand.
The westerly winds have spread “seaweed” (read dry leaves of Posidonia) across the central part of the bays both on land and at sea. The beach and the beautiful reflections of the sea front will not be seen again until the next storm clears away the brown leaves soaked in water.
This is a good lesson for anyone who imagines nature as something to be controlled or to be submitted to their will. Here, it is the power of the sea and the wind that decide the destiny, and you want to build walls and piers!
The island is prepared to reflect, it is a melting pot for alchemy for those who approach it with a minimum of humility. It resembles those ancient gods that simultaneously show off the beautiful face of creation and terrible destruction.
It helps to regain a sense of limits: a night well spent!
Graziano Rinaldi