Nothing can be ever more deceptive and false than cliché. One of these says that the three bees presented on Napoleon’s Elba flag stood for the industriousness of the three different geographical and administrative districts that represented Elba in the  early nineteenth century. In actual fact the wily Corsican Napoleon had already attempted to replace the lily, symbol of the French royal family, with “his” bee, before experiencing his exile on Elba. But a belief, though false, always comes from an underlying truth, and here in San Piero, set between the mountain and the sea, there is a point of view that: one, the island of Elba has been inhabited for thousands of years by people who, by the sweat of their hard labour brought every crumb of bread to the table; and two, that today in a very short time you can drive along the beautiful scenic road from Portoferraio to San Piero. This is more than true for those who were coming from the east, the mining centres such as Capoliveri and Rio Marina who up to about 70/80 years ago perceived this as an adventurous journey on Elba to a far away and very different world. 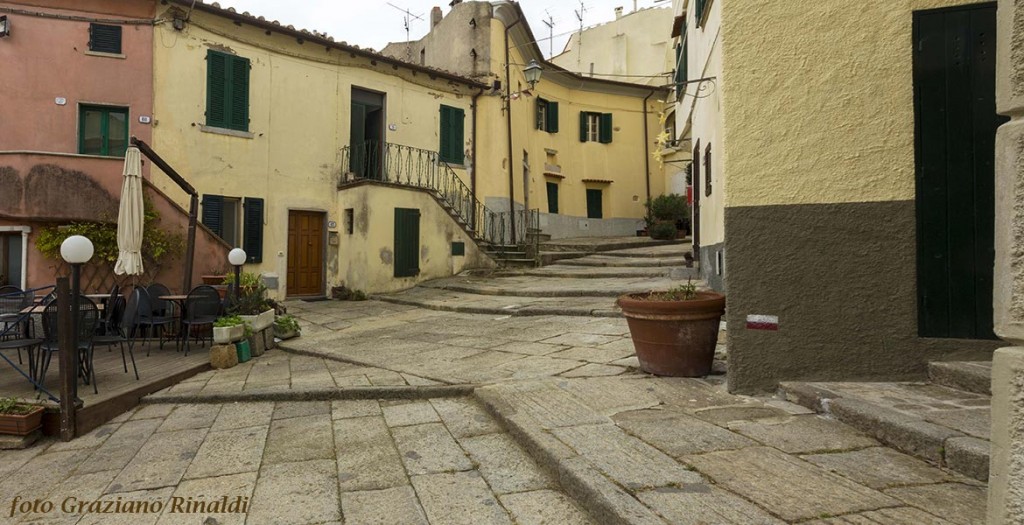 When arriving in San Piero I imaginethat you would head immediately to the most scenic spot behind the “old church”, which today is the church of St. Nicholas. We are just two hundred feet above the beach of Marina di Campo, which you can just make out from this distance, as it is surrounded by urban sprawl. For countless centuries on that providential expanse of sand, sailors landed from around the Mediterranean, and not all were well-intentioned. It is no coincidence that strategic hill on which San Piero in Campo stands, was in Roman times dedicated to Glauco, protector of sailors. It isn’t surprising then, that this beautiful panoramic town, simply paved in Florentine terracotta with simple but lovely granite benches, hosts a very special Romanesque church, a temple which was built dedicated directly to Glauco: we know that in Christian culture they used to build on the ancient temples “false and lying”, gods as Dante mentions in the Commedia.This church, built in the first half of 1100, is an authentic jewel of the Romanesque style, being one of the few Italian churches of this period with two aisles of equal size, originally dedicated to St Peter and St Paul: a nave each and without favouring anyone in particular! Its location was particularly vulnerable to attacks and sieges by a pirates who had always plagued the Mediterranean coasts and so on advice, a couple of centuries later, it was incorporated into two bastions. There were two apses together which was rather unnatural in both churches and fortresses and so when, a third of the original building was sacrificed to obtain a militarily useful space, the church of St. Peter and Paul came to assume that strange polygonal shape that we see today. The interior of the church, despite the obvious additions, such as the frescoes and the gap between the floor and columns, has the severe simplicity of the Romanesque towns that are found in the district of Volterra, and it emanates a spirituality alive and well and even more robust than the bastions protecting it. 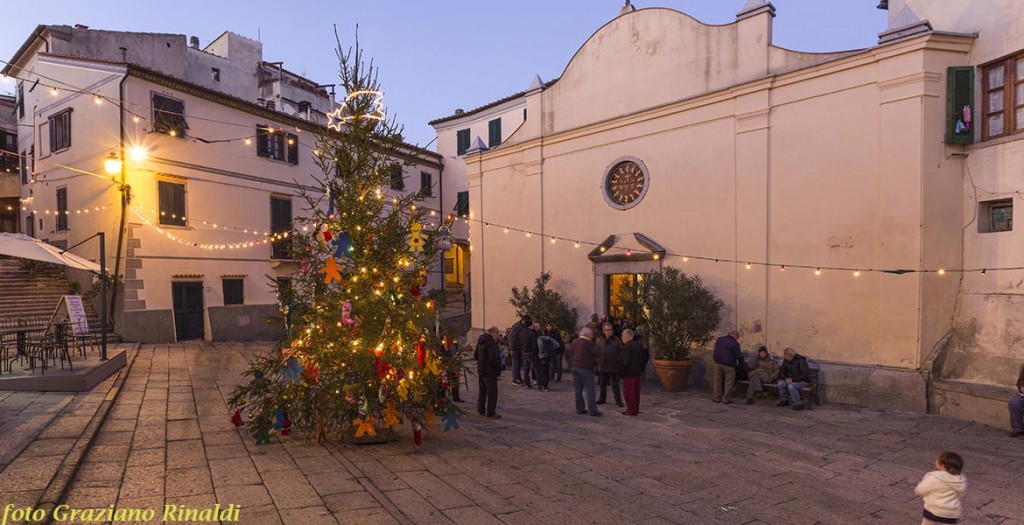 Even the saints change their address

As happens often in this world, nothing stays the same and the “old church” lost its two saints at the end of the seventeenth century, obviously now too prestigious to live  in this bare and precarious parish; they were transferred to the new church in the town, more comfortable but absolutely devoid of the strength and charm that still you can easilyperceive in the Romanesque one and which was dedicated to a less worthy saint than San Nicholas.But the parish church of St. Peter and Paul is certainly not exuberantly baroque and bombastic, but retains a good, modest and dignified style even when stripped of its medieval austerity, and retains a simplicity that distinguishes this beautiful village and its inhabitants. The facade of the church stands as the architectural and social focus in the town, right in the centre of a square that also deserves our attention. Given that we are in the heart of a granite mountain, everything is granite. The houses themselves were built on the hard rock and in every construction detail, you will see the grizzled rock. So the village square is a unsophisticated but successful social amphitheatre of the village, every alley opens out onto its steps, which all converge in the perspective of the churchyard. The “Sanpieresi” are active people and during the summer this small and charming square is enlivened with the right balance between  panache and sobriety that the atmosphere requires.

It may seem strange, but the small village is divided into four districts (a custom used to the maximum degree in Tuscany, where a good example even today is the Palio in Siena and there I can assure you that there is no question of folklore!), Of course, the homes are within a few tens metres of each other, and of course you need no guides, since it is enough to explore the few narrow streets of the town alone. In some places you can’t escape the presence of ancient walls that jut out from the houses: the remains of the defensive walls that have been incorporated into newer buildings. From the door of the town to the “old church” is less than three hundred meters and the two are connected by two rows of houses in a straight line with nice granite portals, while just outside the door, on the left, you will notice a sturdy building with a large coat of arms above the lintel which had been the “Palace” in the fifteenth and sixteenth centuries, as we read in the chronicles of a local historian who had collected all the books that concerned the interests of the local population. And so San Piero had its government palace and where they say that criminal offenders were pilloried on the granite staircase that runs along the other side of the Palace, and where they evidently also practiced justice. Last, but not least, I note, that in 2014, next to the old church, they opened a gem of mineralogical museum with the most elegant tourmaline that you can see around the world. There is, in fact, a wonderful collection of minerals from Monte Capanne, where San Piero is the epicentre of the geological and mineralogical. But I will not dwell on this because this special museum well deserves a post of its own.

I openly declare that my intention is to contradict the  usual “tips for tourists”, where these small hill towns of the island, are recommended only as a poor alternative to a good day of swimming.