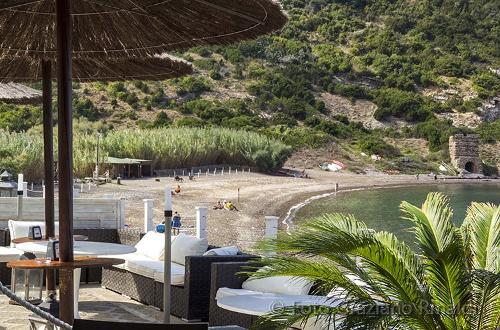 Apartments and houses in Nisporto

When the ferry from Piombino to Portoferraio is in sight of the island, the last stretch of coast before entering the gulf is softened by two small, perfectly semicircular beaches, which are the beaches of Nisporto and Nisportino, the first of which is the closest to Portoferraio. Nisporto beach is perfectly sheltered by a beautiful cliff in the shape of a horseshoe. Here you can spend a relaxing holiday, away from the turmoil of the Elban summer and in touch with a powerful natural environment, with the wonderful sea and sunsets that will long remain in your heart.

Getting to Nisporto
If the place is so pleasant, you might imagine that to get there it would be necessary to embark on a difficult journey by climbing up the narrow, winding streets of the island. In fact, until a few years ago the journey was just that, but in 2014 the last stretch of dirt road was paved and now you can reach Nisporto from the port of Portoferraio in 15-20 minutes of easy road which, moreover on the last part, is extraordinarily scenic, passing over a high, wooded cliff from which you can admire the Gulf of Portoferraio in all its natural beauty. At that point, standing on the fifth hill of the chain of Elban mountains that creates the Gulf, the postcard view of the Mediterranean would alone be worth the trip, especially when the sun sets in the sea right in front of Nisporto.

Services
Nisporto was nothing more than a well-protected beach in the beautiful gulf of Portoferraio; then, precisely because of the beautiful pink limestone cliffs that makes it, an extractor of this soft rock was first established and then a furnace was built to transform the limestone into lime. The building that looks like a red brick tower at the western end of the beach is all that remains of this activity. Actually there is one other thing that has to do with the excavation of limestone, which is the house of the owner of the quarry. It is a large house on the cliff, in a magnificent location overlooking the sea, now converted into apartments managed by our organization. Recent years have seen many holiday apartments and villas built, perhaps too many, but this has also made Nisporto a seaside resort with everything, including a shop-type bazaar where you can find anything you might need during the holiday, a bar, restaurant and pizzeria. There are also parking near the beach and a modern lounge bar and restaurant right on the beach where it would be nice to spend some time listening to music and watching the sun go down exactly perpendicular to the beach.

The Beach
The beach is medium in size for the island of Elba, and about 250 meters of multicolored pebbles, fine gravel and sand. It's never crowded so that even in high season you can fully relax, and you can rent beach chairs and an umbrella. Above all you can swim along the beautiful rocks, both to the right and left. In each case, you will be pleasantly surprised to discover the amount of life in the depths, always different, and populated by animals that are becoming very rare elsewhere-- for example, it is easy to find, anchored to the bottom of Poseidon's prairie, the young Fins nobilis, the largest bivalve in the Mediterranean, which can reach one meter in height; I said “young” because when it exceeds a certain size it becomes too visible and some scoundrel is always there to pick it up.  For anyone wishing to try their hand at a medium difficult swim, I would suggest the eastern part of the rocks, on the right looking towards the sea, which divides Nisporto from Nisportino. It may be that while you are swimming, you might see whizzing above you one of the world's rarest gulls, the “Corso” gull, easily distinguishable from its very common cousin the Royal gull, because of its smaller body, red beak with a black spot, and olive green legs.

Where to go to the beach or at night if you don't stay in Nisporto
Most likely if your decision was to rent an apartment in Nisporto, very often you will decide to spend the day on site; but if it should happen that during your vacation the wind from the northwest that comes right into the beach starts blowing, making the beach a not very pleasant place for swimming, you will have to move south or east. In the geography of the island this means putting yourself in the downwind areas, and those closest to Nisporto are the southern beaches of Capoliveri such as Lido di Capoliveri, Lacona, and small coves like Cala Peducelli or Our Lady of Grace, or the beaches of Rio Marina like Marina and Cala Seregola.You still have to go by car and drive for 20/30 minutes. In the evening, if you aren't surrendering to the calm surf off the beach of Nisporto or the elegant bar/ restaurant on the sea, you can choose to go in either direction on the only road: you can return to Portoferraio and visit this beautiful Renaissance city which also has the remains of a Roman villa of the imperial period inside it and is the capital of the island of Elba which, foolishly, many tourists use only as a port of embarkation/disembarkation. Or you can head over to the opposite side of the island to the area of   Rio. More or less it's still about 20 minutes by car, whether you go to  Portoferraio or Rio. If you are going to go to Rio, Rio Nell'Elba, an  ancient village which is well worth a visit if only for the view, but  also offers much more than a beautiful sea view, and there is also a  good restaurant. From Rio nell'Elba, if you decide to drive for another  5-10 minutes you will be in Rio Marina and within 15 minutes in Porto  Azzurro. So in less than an hour you will have reached the whole eastern  side of the island of Elba by car.